Looking out of the home office window at a beautiful autumn day, and having experienced some of the sunniest Springs and Summers on record it is hard to imagine that at the start of the year the UK was being battered by Storm Ciara and Storm Dennis which caused widespread flooding across large parts of the UK.

What has been a blessing for many during this lockdown period can be a bit of a nightmare for drainage engineers who are trying to convince their clients that they need to forward plan and develop their sites to take into account the risk of flooding. I imagine it is a little bit like how Noah felt when he was trying to convince his neighbours that there was really a need for an Ark.

But planning sites for flood risk is vital in ensuring that not only damage is minimised but also that occupants can safely evacuate in a flooding event.

One of the best visual examples I have seen recently is that of a flooded farm in Lincolnshire. Although devastating for the farmer and his livelihood it was a perfect example of good design in that the farm buildings themselves had been situated above the flood level which allowed a safe refuge and evacuation point.

This week we will be finding out a bit more about Flood Risk Assessments, finding out what they are, why we need them and what they cover. 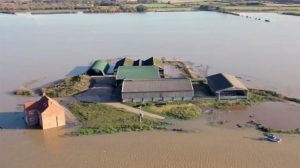 Let’s start with the basics…when do we need a Flood Risk Assessment?

In essence, this is driven by Government guidance which states that you need a Flood Risk Assessment if your site meets one of the following criteria (https://www.gov.uk/guidance/flood-risk-assessment-for-planning-applications):

What is the difference between the flood zones and how do I know what zone my site is in?

Firstly, it is important to remember that the flood zones only deal with the probability of your site flooding from the river or sea, it does not consider the risk of flooding from any other source. They also do not take into account any defences, as they try to show what would happen should the defences be overtopped or breached.

So, if you know the postcode of your site, you can very quickly determine whether your site is at risk from flooding by using the online flooding maps (https://flood-map-for-planning.service.gov.uk/).

Flood Zone 1 means that your site has a low probability of flooding from rivers or sea or a less than 1 in 1000 chance. This is the most desirable outcome and on the maps, it is shown by no shading as indicated in the image below.

Figure 2: Example of a Flood map for a site in Flood Zone 1 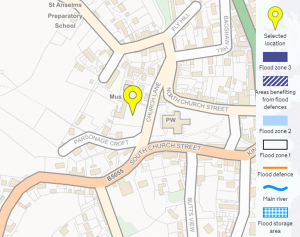 Flood Zone 2 is illustrated by light blue shading on the flood maps and demonstrates that your site has a medium probability of flooding which is defined as:

Figure 3: Example of a site in Flood Zone 2 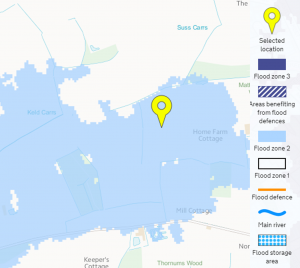 Flood Zone 3a demonstrates that the area has a high probability of flooding which is defined as:

It is illustrated on the flood maps through dark blue shading (see image below).

Figure 4: Example of a site in Flood Zone 3a 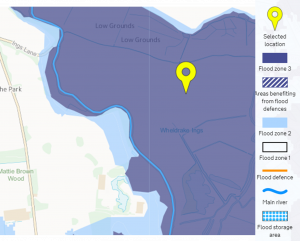 Flood Zone 3b, also known as the function floodplain, is an area of land where water is allowed to flow and be stored during a flood. It is usually shown on the flood maps by blue dots and details should also be found within the local planning authorities Strategic Flood Risk Assessments which you can access on your council’s website.

Figure 5: Example of a site in Flood Zone 3b 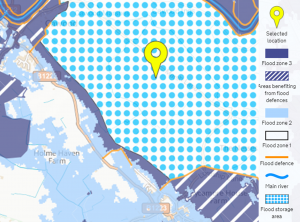 What other sources of flooding could affect my site?

Flooding from Rivers and Seas is probably the most understood source of flooding however, there are lots of other ways water can get into your property.  These will need to be explored when you are purchasing a site and can include:

The final source of potential flooding could come from the development itself if the system is insufficiently designed to deal with the surface water generated or the designer fails to consider what will happen to the water in an exceedance event.

So what happens if you find your site is at risk of flooding does it mean it can’t be developed?

All of the above can sound a bit scary and make you wonder whether it is worth starting your development at all. The great news, however, is that in most cases, even if a site is at risk of flooding in some form, it is likely that is can still be developed and the FRA should identify how this can be achieved safely and sustainably.

A designer can then use this information to develop an outline drainage design which ensures that the proposed development is situated above the required flood level, takes into account the effect of climate change and makes sure that there is always safe access and egress from the site whatever the weather. 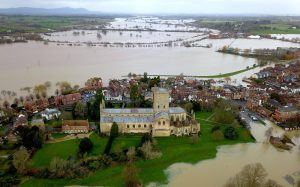 A flood risk assessment is a powerful tool which can give you all the knowledge you need to make your development successful in terms of drainage and protect it from flooding. It is therefore always a good idea to spend a bit of time at the start of your process making sure you understand your risks and that your layout has been developed to maximise the opportunities that good drainage design can bring.