Picture the scene, it’s a murky grey day, you are in a car driving down the motorway as a passenger, you have finished the Haribo, it’s miles to the next services and the driver’s choice of music is rubbish. As you glance out of the window you suddenly notice something odd… it’s pouring down with rain but yet there is no water on the carriageway and what’s more from a quick glance you see no obvious signs of drainage…where is the water going? And wait a minute what is that strip of gravel doing there? 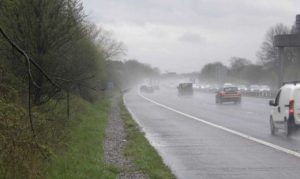 OK so you probably have never had this epiphany while on the M56, but it does set the scene quite nicely for our exploration into the wonderful world of SuDS where this week we are moving down the hierarchy and exploring the role filter drains can play on your development.

So, what are filter drains and how do they work?

In simple terms, filter drains are just shallow trenches which are filled with either stone or gravel. They work best when they are receiving lateral flows from small catchments and they are generally used for the temporary storage of runoff as well as to convey and treat surface water.

A typical cross-section is included in Figure 2 below.

Why should we be thinking about using them?

Some of the best applications of filter drains are adjacent to carriageways, however, they also work well when incorporated into landscape designs.

They are a shallow system with depths typically ranging between 1-2m and they work best on flat sites to allow the slow of flow of water through the system which maximises the pollution removal.

In comparison to other systems we have discussed, filter drains are not intended to function as a sediment trap and it is therefore important to remember that they should be combined with a pre-treatment system which will minimise the risk of clogging and failure.  This does not need to anything extensive as even a 0.5m strip of vegetation can be enough to remove most of the silt from surface water runoff.

So, are there any amenity and biodiversity benefits?

Although not at the same level as features such as ponds and swales, filter trenches still have some biodiversity and amenity benefits.

In terms of amenity, if used in the right place, they can create some attractive boundary lines as illustrated in Figure 3.

Figure 3: Example of how filter drains can be used to enhance amenity 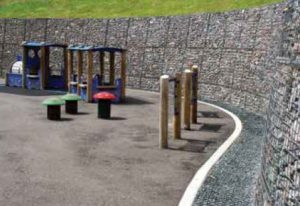 There is also the option if gravel is not your thing, of covering them with topsoil and planting them with grass. If you are going to adopt this approach, however, it should just be noted that while the grass can reduce the risk of clogging it can also hide any maintenance requirements making them harder to spot as you are in essence just burying the system.

When we look at the potential biodiversity benefits, something which I always find quite mind-blowing is that the gravel media can host microorganisms as well as provide a breeding ground for both insects and amphibians. While this might not be the most exciting of habitats it is still vital in the overall food chain. You also have the option of incorporating some planting if you really want to maximise the biodiversity benefits. 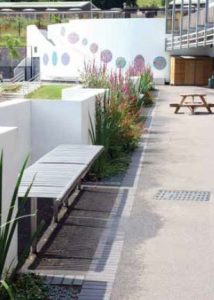 Is there anything we need to be aware of?

There are a few things that you should consider before deciding if a filter drain is right for your development. Most of this can be linked back to maintenance, so it is probably best that we first get a grip on what might typically be required.

Regular maintenance activities which should be carried out each month could include things like the removal of litter and debris from the filter medium as well as inspection of the surface to identify signs of clogging or surface water ponding.

Less frequent but equally important maintenance requirements are the washing and replacing of overlying filter material as well as jetting the perforated pipework to get rid of any blockages.

So, what happens if systems are not maintained?

Well, in short, it increases the risk of failure of the system which could result in having to replace the filter medium which can be extremely costly, a bit like if you don’t get your car regularly serviced and then a big fault develops.

The next thing to consider is that it is really important to allow for that pre-treatment as failure to do so could lead to the filter medium becoming blocked which means the system will not operate as effectively.

Finally compared to other SuDS features where a lot of the issues can be seen at the surface, with filter drains, the build-up of blockages and pollution can be difficult to see, meaning you might not know there is an issue until it is too late.

So, in summary, while filter drains might not be the most exciting feature we have covered so far, they certainly have their place as part of a well-established drainage system.

Their simplicity and ability to slow the flow through a development, while treating potentially contaminated surface water runoff makes them a valuable asset to the drainage engineer and they should not be discounted straight away when considering options on your project.