I don’t know about you, but I love a bargain, however, if you noticed the offer above would you think it was too good to be true?

Welcome to Week 2 of our deep dive into the world of Sustainable Urban Drainage Systems and before we proceed into looking in a bit more detail about the various components, I thought this week I would provide a bit of an overview into something called the four pillars and how it relates to the SuDS hierarchy.

So what are the four pillars?

We touched on this a little bit last week, however, just to recap, the basic aim of SuDS is to mimic the natural runoff profile and maximise the benefit of how surface water in managed on a development. What benefits can be achieved will really depend on the site, however, they fall into four distinct categories which have been labelled ‘The Four Pillars of SuDS’. 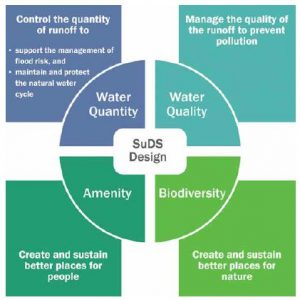 The first pillar is the control of the quantity of runoff, or to put it into simpler terms, how well a SuDS feature attenuates the flow. This is the basic requirement of a SuDS component and in essence is what your drainage engineer should guarantee as part of their design. No matter what system is implemented to be classed as a SuDS feature it should always have the ability to slow the flow by storing water and releasing it at a controlled rate through some sort of flow control.

The next pillar is managing the quality of water runoff. This is in relation to reducing the risk of the nasties such as sediment and hydrocarbons getting into our rivers and watercourses and causing a pollution incident. There has been an increased drive by local authorities in recent years to ensure that the drainage system provides sufficient treatment prior to discharge with different SuDS features being assigned different mitigation index. These can then be used in the Simple Index Approach calculation set out in the CIRIA SuDS Manual C753.

The third and fourth pillars are often grouped together and cover how well the system contributes to the creation of amenity space and promotes biodiversity.

The creation of amenity spaces really deals with how well the system creates better places for people to live. They do this by providing more green space or access to water both of which have been shown to improve health and wellbeing. On the other hand the promotion of biodiversity focuses on the creation of new habitats for wildlife and nature, some of which may have been lost as a result of the development itself.

Ok so we know have an understanding of how we can get more bang for our buck when it comes to drainage design, but what is the SuDS hierarchy.

In essence, it is a way of ranking the various components from the most to least sustainable and whether they meet 1, 2, 3 or 4 of the pillars of SuDS. Items such as green roofs and ponds are at the top, as they not only meet the attenuation requirement but also provide opportunities to improve water quality, create amenity spaces and promote biodiversity. On the other hand things such as oversized pipes or tanks only provide attenuation meaning you not only miss out on some of the other benefits that a good SuDS scheme can provide, but you also might have to pay for additional treatment measures such as oil water interceptors to ensure that there is an improvement in water quality.

Based on your feedback, next week we will be starting right at the top of the hierarchy and taking a closer look at green roofs, where we will be highlighting some of the benefits, showing how they can be adding value to your developments and some of the things you may need to consider.